En vacances 3 - some great wines plus a few lazy days

As I'm typing this, I'm sitting on the patio of our lovely gite in Laurens, in the Faugeres region of Languedoc. It is 11.30 (French time) and pitch dark. The heat of a scorching day has been replaced by a beautifully cool evening. There's not a breath of wind and the only sounds to disturb the still silence are the distant croakings of a few frogs (at least that's what I think they are) and the occasional hoot of an owl. It is complete bliss.

I've been a bit lazy with the blogging, actually, as it isn't as if we've been sitting sunbathing all the time - we have been busy doing other things too! Having arrived here in Laurens on Saturday to cloudy weather (and some rain on the way) we awoke on Sunday to a bright, sunny day. From what I am told, the Languedoc (much like many other regions of France) has had a funny old spring - in fact, not much of a spring at all. Until we arrived, the weather has apparently been cool and very changeable. Since Sunday, though, things have picked up considerably and summer has now definitely arrived with a vengeance in Languedoc. It took a day or two for the wind to die down, but the days are now accompanied by the gentlest of breezes and temperatures pushing 29C - too hot for me to sit out in (though TLD loves it) but the house is built of stone and is beautifully cool. Thankfully, the pool has also now warmed up a little, so provides some extra relief from the hot sun.

As I say, though, it hasn't all been about lazing around. Diane and I have been out for several bike rides in the surrounding countryside and yesterday (Tuesday) we visited Brigitte Chevalier at Domaine de Cébene, along with my good friends Jonathan Hesford of Domaine Treloar and Guy Vanlancker of Domaine La Combe Blanche. I'll tell you more about that visit in my next post. For now, I'll tell you about the brilliant Terre Inconnue.

Robert Creus (pronounced "Cruz" or "Cruise") works for the French Chamber of Commerce. He is actually an experienced scientist, having been heavily involved in the Ariane space rocket programme. He began making wine in 1997, having bought some old Carignan vines near the village of Saint Christol. He has since added Grenache, Syrah, Serine (a northern Rhone variant of Syrah) and a little Tempranillo. Some of the vines are very old, including some Carignan which is in excess of 100 years old. Having heard so much about the wines (especially having recently tasted a 1999 Carignan, which was pretty amazing) I was very keen to taste the whole range. The only really suitable day for us to visit was Saturday, on our way from the Cote d'Azur to Faugeres, since it entailed just a short detour from the autoroute between Nimes and Montpellier. Robert was working on the day we visited, so his father Lucien received us at his house in the small village of Saint Series.

Although Robert makes the wines, Lucien himself has more than a little involvement in Terre Inconnue. Indeed, he no longer has room in his garage for his car, since it clearly comprises part of the Terre Inconnue wine store! Lucien is a charming old man, with a real passion for the wine, not to mention a wicked sense of humour. He took us through the current range of wines - 6 different cuvées, made from around 4 hectares of vines from different parcels around Saint Series and Saint Christol. As Robert cannot be bothered with the bureaucracy and paperwork involved in Appellation Controlée or even Vin de Pays certification, all of the wines are labelled simply "Vin de Table de France". My notes were fairly brief, although I came away in possession of sample bottles of each, for which I will eventually post more detailed notes. Here are my brief impressions.

Les Bruyeres 2009
100% Carignan, with a nose of Bramble and damsons. Dense and mouthfilling, with fine young tannins and lovely structure. Immensely fruity, but with some nice herbal notes. My experience of the 1999 (which I blogged about a couple of months ago) tells me that this will age beautifully for a good few years, even though it is already lovely.

Los Abuelos 2002
100% Grenache. The nose is spectactular - a complex array of pastille fruits, leather, spices, herbs and forest floor. There's an impression of subtle coffee-infused oak, although only older barrels are used. There is still a lot of fruit, although it is beginning to take on all those wonderful secondary aromas and flavours. Dense, fairly rich, but supremely elegant, hugely complex and utterly gorgeous. A truly remarkable wine, from a difficult vintage.

Los Abuelos 2007
Again, 100% Grenache. The 2002 was an "extra", as I had asked to taste an older wine - 2007 is the current release. It is dense, full of bramble fruit and tar aromas and flavours, again with those lovely pastilley, crystallised fruits to the fore, and the same restrained use of older oak. Rich, concentrated and super-ripe, but so elegant. Very long, too. A superb wine.

Guilhem 2008
Grenache, Carignan and Tempranillo. This is so complex on the nose and I certainly need a longer look at this when I open my bottle, in order to fully appreciate it. Dense, fruity, spicy, with notes of polished wood. Rich and very long in the mouth. An impressive, complex wine, with enormous structure and not a little ageing potential.

Sans Nom 2005 (i.e. it doesn't have a name)
I'm not sure what the story is behind this wine, but it is by no means one of the more expensive wines in the Terre Inconnue portfolio. This is an extraordinary wine. Lucien gave me the rest of the opened bottle to enjoy with our meal that night, and you can see my full note in my post below. Huge fruit aromas and flavours, mingled with mint, eucalyptus and menthol, tar and polished wood. An amazing wine - very alluring and unusual, and utterly memorable.

Leonie 2003
100% Carignan. Fruit pastilles again, along with elderflower, mint, thyme and lavender. Less dense than you would expect from the vintage - elegant and almost feminine. Another lovely wine, and yet more evidence (as if I needed it) that Carignan can make extremely fine wines.

Sylvie 2005
Syrah and Serine. Not surprisingly, this smells a little like a northern Rhone, but with a Languedoc structure marked by notes of black olives, garrigue, bramble fruits and eau de vie. It is still clearly very young and immature, dense and slightly tannic, though the tannins are almost obliterated by the sweet fruit flavours. That said, it is hugely complex and I think there are hidden depths, which will only be revealed in time. And at 15% abv, it isn't weedy, either, although this is a classic example of a wine which is totally in harmony with its alcohol - it is warm and rich, without any feeling of heat. I think it will be brilliant in another 5 to 10 years.

After our tasting, Lucien's wife took pity on us (we hadn't eaten since breakfast) and prepared us a delicious dish of fried eggs, cured ham, pickled red capsicum peppers and crusty bread. A delicious combination, and just what the doctor ordered. Lucien then took us to see some of the vineyards, including some 40 year-old Grenache, a new Syrah vineyard and some amazing 100 year-old Carignan. 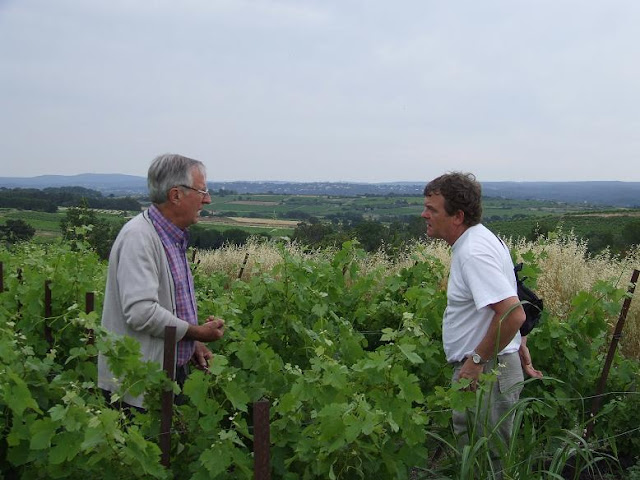 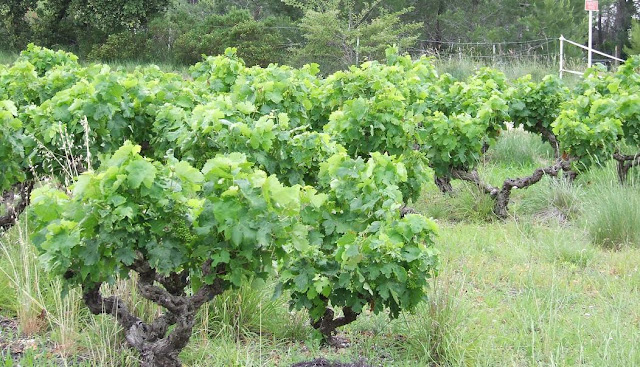 The vines were healthy and well-tended, with a reassuring amount of vegetation growing between the rows - Robert prefers as little intervention as possible, particularly in the vineyard. The wines are made as naturally as is sensible, with little or no spraying in the vineyard and only a small amount of SO2 used in the winemaking process. The result is a truly remarkable range of wines, with a real "wow" factor, and I hope to be able to add some (if not all) of them to my list, in due course.
We are off to the beach at Marseillan tomorrow. I'll post some more stuff before the end of the week, including notes on our visit to Domeine de Cébene.

Leon
terres inconnues sounds really good.
I think I still got a bottle or two of the same vin de table you had last week.
If you need help to taste the wines when you get back you know where I am.
BTW check my Facebook page for yesterday's poachers wines.
Bernard