Wot - 2 blog posts in a day?! Well, I thought that whilst I was on such a roll, I would give you a pointer towards an excellent new(ish) blog, authored by one of my customers and Facebook friends, Alan March.

Alan retired this year, from his job as a school teacher in the north-east of England. Much like TLD and I, Alan and his wife have been holidaying in Languedoc for many years and have developed a great love for the region, it's culture and of course it's wines. So much so that they decided to make use of their new-found leisure and spend a whole year living the dream in rural Languedoc. Although they haven't (yet) decided to make the move permanent, I suspect that may be a strong possibility(!)

Not that it has suddenly become all play and no work for Alan. Over the years, he has formed a strong friendship with one of the region's most enigmatic winemakers, Jeff Coutelou. So much so that, since his arrival in Languedoc a couple of months ago, he has been hard at work as Jeff's all-round helper in the vines and the cellar, learning the ropes and generally immersing himself in the everyday workings of a Languedoc wine estate. Not to mention tasting plenty of fabulous wines along the way. It's a hard life, but I guess someone has to do it!


Alan and I have yet to actually meet, although after many years of correspondence via this blog, Facebook, other wine websites and email, it seems like we know each-other well. And I won't let the fact that he is a Liverpool supporter (my loyalty is with Nottingham Forest) get in the way. Nor the fact that, whilst away from the UK, he isn't buying any of my wines! ;-)  I actually owe Alan a debt of gratitude for having introduced me to the wines of Mas Coutelou. He'd been banging on about them for so long that I felt I needed to taste them and see for myself. So whilst on holiday in June, TLD and I visited Jeff and were treated to a fascinating tour of his vineyards and a tasting of some of his wines (even though he had none to sell, at the time). Suffice to say that I was blown away by Jeff's wines and his whole viticultural and vinicultural ethos. And, with more than a little help from Alan as my "man on the spot", I have since managed to secure a shipment of Jeff's latest wines, which will arrive in stock next week. I can't wait!

I shall write in more detail about Mas Coutelou very soon. Meanwhile, I urge you to take a look at Alan's blog, A March In The Vines. As a journal of his adventures in and around Languedoc (and occasionally further afield), it is rich in content and really is well worth following - and you even get to read it in a choice of languages (English and French). Keep up the good work, Alan!
Posted by Leon Stolarski at 09:18 4 comments:

I posted the following note on my Facebook page last evening and someone suggested that "it feels like a blog post". Which I must say did strike a chord with me - it isn't that I have disappeared from the social media scene (which I guess includes blogging), it is just that Facebook seems a much easier medium in which to post quick entries, directly from my phone. Then again, a lot of potential blog posts have gone this way in recent months, and it seems a shame not to spend a few minutes cross-posting them to my blog. Plus of course there are plenty more (sometimes much meatier) issues that deserve blog posts of their own. Therefore, you can take this as a commitment to start ramping-up the blogging again (yes, I know I've said it many times before, but now I'm serious!). Now if I can just shake off this horrible virus that has been bugging me for the last 3 weeks, I might just find the energy and enthusiasm to keep my promises....... ;-)

Chateau La Dournie "La Dournie" 2011 Saint-Chinian
This has the unmistakable whiff of a (very) fine wine...... a veritable cornucopia of fresh and preserved red and black fruits burst forth from the glass, combined with (but not to be out-done by) all manner of herbal, floral, medicinal, earthy and savoury aromas. Freshly baked bread/brioche also gets a look in, not to mention a hint of the very finest eau de vie you can think of. Oh and just the *faintest* lick of (older) oak. It really is quite the most complex, integrated and intoxicating wine I have sniffed in a while. If I didn't know better, I would swear there was some Syrah in there, but this is a blend of Grenache and Carignan, so I guess the classic Saint-Chinian terroir (schiste) has worked it's magic once again. There's always a danger that such a wonderful nose might end up as the highlight, but in this case not a bit of it - this wine is absolutely the real deal, with oodles of spice-laden, garrigue-infused black cherry and bramble fruit, rich, ripe tannins and a backbone of truly mouth-watering acidity. 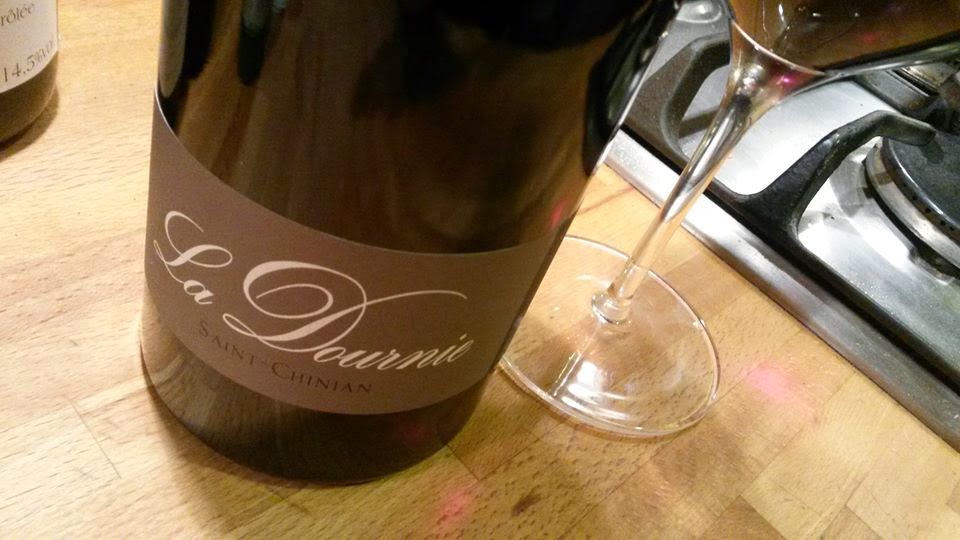 A rather well-known and respected wine writer and Languedoc expert described this very wine as "reminiscent more of Châteauneuf-du-Pape, but not too heavy or alcoholic". Well I am here to tell you that the latter may be accurate, but the former is complete tosh. For although it may not be like your everyday Saint-Chinian, it does possess all of the vibrancy and elegance that the best wines from this (relatively cool-climate) region of Languedoc has to offer - and is therefore far more reminiscent of the wines of the northern Rhone. The more I drink it, the more I am falling for it's rich, sweet-sour, tangy-spicy-herby loveliness. Apparently, there were just 600 bottles of this wine produced for the inaugural 2011 vintage. And having not tasted it previously, I have to admit that I bought a shamefully tiny quantity. So small in fact that I will limit my customers to 3 bottles each. And at £21.95 (yes I know, expensive for Languedoc) it is a fantastic bargain. Bravo Véronique Etienne - you have created your masterpiece..... and please save me a few more cases for my next order!
Posted by Leon Stolarski at 07:52 No comments: