This week at the Nottingham Wine Circle, we were treated to a tasting of wines from the celebrated Bandol estate, Domaine Tempier. Three separate verticals of the estate's single-vineyard cuvées were on offer, kindly provided (and presented) by one of the Wine Circle's long-standing members, Edwin Wood - and all for the princely sum of just £15 per person!
All of the wines are aged for around 20 months in large, old oak casks, and the wines are neither fined nor filtered before bottling. 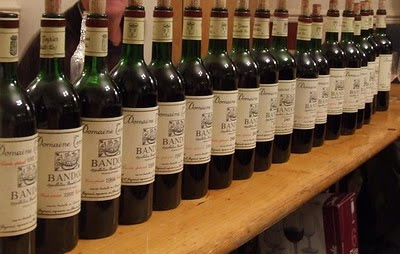 The line-up - that's a lot of Tempier!
My notes are all fairly brief, since the tasting was conducted at such a lightning pace (20 wines in a little over an hour and a half!) that it was hard for me to keep up with the wines and write tasting notes at the same time. Frankly, in my humble opinion, these wines deserve more than to be subjected to what amounted to a speed tasting. We began with a rather nicely aged rosé, before moving on to the reds.
1. Tempier Rosé 2000
Orange colour. Creamy. Rich and serious. Fruity, some tannin, dense and mouth-filling. Very nice
2. La Migoua 2004
Meaty farmyard nose. Crystallised fruits later. Lovely acidity.
3. La Migoua 2003
Dense and rich. Harsh tannins follow the fruit quite quickly and linger on the palate.
4. La Migoua 2001
Tobacco and cedar nose. Shows a touch of brett, but lots of fruit too. Dense and spicy palate - rich fruitcake flavours, bramble and raspberry. Very fine tannins. Long and warming. Superb.
5. La Migoua 2000
Bretty, blackcurranty, almost Claret-like nose. Tobacco. Bramble coming through and eau de vie. The palate also shows a lot of alcohol. Unbalanced and not that pleasant to drink.
6. La Migoua 1999
Bretty, tarry, cedar and bramble. Smells hot and tastes hot. Plenty of volatile acidity, but not enough fruit to cope with it. This too is unbalanced and hot. If you have some, drink up.
7. La Tourtine 2002
Lots of fruit on the nose. Floral, cherry, bramble and brett. Light and ultimately fairly simple.
8. La Tourtine 2000
A curious nose of tar and diesel. The palate is rich and spicy, tarry and herby and still quite tannic. Needs time but could be very good in 5-10 years.
9. La Tourtine 1999
Earthy and meaty. The palate is slightly warm and alcoholic. Flavours of cherry kernel, spices and Agnostura bitters. Not sure about this one. Was 1999 a difficult year?
10. La Tourtine 1998
This has a very sexy nose – tobacco, meat, fruit and iodine - very complex. The palate is velvety and sweet with soft tannins and ample acidity. Balanced, rich, long and lovely. The complete Bandol.
11. Cabassou 2005
Smells like new world Shiraz - mint and herbs, rich upfront fruit and lots of oak. The palate is super rich, with sweet fruit. Very soft, very drinkable and very modern – but not typical Bandol.
12. Cabassou 2004
This has a sweet, extracted, Chateauneuf-like nose - alcohol, sweet fruit and VA. The palate is rather lovely, in a Chateauneuf sort of way, but is undoubtedly big and rich, rather than elegant. Nice crystallised fruits and balsamic flavours, with ample acidity. I like this.
13. Cabassou 2001
Another Chateauneuf nose. Beef gravy, bramble and blackcurrant - like a Vieux Télegraph in style. The palate is again quite rich, but also quite hot and alcoholic – and very extracted. Needs 10 years or more to peak. It could be good, but that alcohol is very intrusive.
14. Cabassou 2000
Brett and iodine. tobacco and spice on the nose. The palate is lighter and slightly less alcoholic and consequently more elegant. Quite Claret-like in structure with plenty of tannin and acidity, tar and even a hint of greenness. This is ultimately quite austere and tough and I am not sure it will age well.
15. Cabassou 1998
This is more like it. High-toned, with aromas of herby garrigue, polished leather and savouriness. The palate is rich, but with a lot of complexity. Fruit, iodine, cloves, tar, spices, orange peel. Still warm, but complex and almost elegant in a big sort of way. It has years left in it.
16. Cabassou 1997
Sweet nose of fruit pastilles and new leather. The palate is soft and rich and elegant but still with some unresolved tannins. This needs a few years to show its best.
17. Cabassou 1995
Unfortunately, this was corked.
18. Cabassou 1994
Chateuneuf again – meaty, leathery, crystallised fruits and garrigue herbs. The palate has some sweet fruit but also some very stalky tannins. Not a great wine - drink up.
19. Cabassou 1992
A nose of iodine, emulsion paint, leather and pencil shavings. The palate has some lovely fresh black and red fruits, but the acidity is on the low side - and the alcohol is very definitely on the high side. Ultimately, it is an OK wine, but too hot for its own good.
We finished with a delicious old wine, which I believe was made from 100% Cinsault, from the La Louffe vineyard, the grapes from which are now incorporated into the Cabassou blend;
20. Cuvee Special La Louffe 1987
Smells old and fully evolved but with lots of interest. Sweet fruit and leather, raspberry vinegar and pickled beetroot - a lot nicer than it sounds! Flavours of soft, sweet fruit, with hints of herbs and VA. Finishes dry and savoury. A lovely old dame of a wine.
This was a tasting that many of us were very much looking forward to, and it was indeed very educational, with a fairly clear distinction between the three different cuvées. Unfortunately, though, there appears to be a clear distinction in quality and style, between the wines from around 2001 onwards and the preceding vintages - no doubt due to the change of winemaker/winemaking at around the same time (you can read more about the history of the estate here). And clearly the pre-2001 wines seem better and more balanced. Which begs the question, has Tempier lost its way? I guess it is too early to tell, but the later wines do not bode well for the future, in my opinion.
Posted by Leon Stolarski at 18:57

It must be about 15 years since my one and only taste of La Louffe 87. It was an entity of remarkably poised beauty for a Bandol, totally beguiling and downright bewitching. A taste memory that will live with me as long as I have a few functioning neurones.

My last taste of Tempier was a comparison of the 1997 Miguoa and Tourtine. I was rather surprised by how mature they seemed. That is one of the problems with these Bretty wines, they can age very erratically.