Bordeaux or Barolo? A bit of a no-brainer!

Those of you who visit the wine-pages.com forum - and I know of quite a few of you do - may have noticed yet another discussion on the "merits" or otherwise of expensive Bordeaux. And there is nothing more certain in life (apart from death itself, of course) than the fact that such a discussion will, sooner rather than later, degenerate into a right royal case of handbags-at-ten-paces. The recipe is very simple;
Attend an event where a handful of top Bordeaux reds are offered for tasting (for maximum effect, they should be First Growths - and ideally with examples of both painfully young and relatively mature wines, by way of comparison). Confirm your long-held suspicion that they really aren't that brilliant and offer shockingly bad value, even for your average billionaire football club owner's money. Write about your experiences on a wine forum which you know to be frequented by wine lovers of all persuasions, from supermarket bargain hunters to serious collectors with fat wallets. Then light the blue touch paper, retire to a safe distance and wait for the fireworks (or handbags) to begin.
I must admit there was a time when I would find it very hard to resist joining in these "discussions", but I eventually grew tired of the posturing and the willy-waving. On the one side you have the vast majority, with their catholic tastes and desire to explore the great world of wine - and on the other, you have the minority, with their unshakable belief that the wines of their chosen region (not necessarily always Bordeaux - Burgundy has its insufferable bores, too) are best, and everyone else is drinking second-rate stuff. Of course, the fact that top Bordeaux is now way beyond the means of the vast majority of drinkers (apart from those who like to keep up with the Jones's, at whatever cost) leaves most drinkers with little option but to be more adventurous. But given that it is possible to pick up a whole case of very fine wine from regions such as the Rhône, Barolo, (traditional) Rioja, California, Australia, Languedoc and even Burgundy for the price of a single bottle of First Growth Bore-deaux, it becomes a bit of a no-brainer. So why bother arguing?
Which all leads me very neatly onto last weekend, when my friend Andy Leslie laid on a rather wonderful dinner party, based largely around funghi of various types, accompanied by a mightily impressive (and beautifully aged) bunch of Piedmont wines.
This being a dinner party, it would have been a little too geekish even for me to write notes on the wines. Instead, we concentrated on enjoying and appreciating them in the way they were designed to be - as an accompaniment to fine food. Before getting down to the really serious stuff, we enjoyed a trio of white palate cleansers; a delicious, frothy, semi-sweet Bera Moscato 2009 was followed by a rather hedonistic and perfectly aged Perrier Jouet Belle Epoque Champagne 1989 and Afros Vinho Verde 2009. Then it was onto the food - and truly outstanding food it was, too;
Here's a little food porn for you (with apologies for the somewhat blurry middle photo)................ 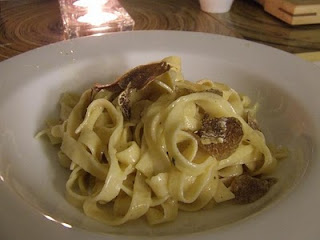 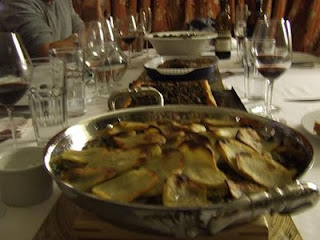 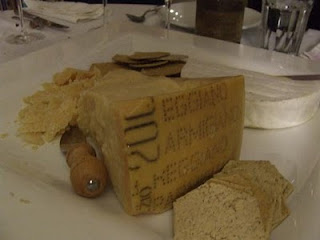 Wigmore Waterloo and Parmigiano Reggiano
That little lot was perfectly accompanied by the following wines; 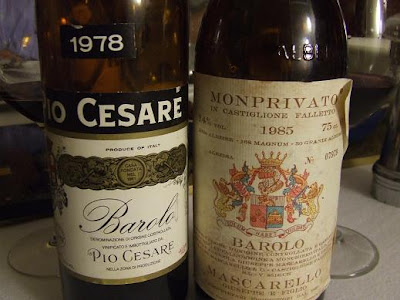 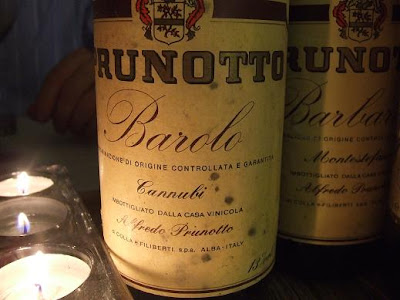 As I said, this was not an occasion for note-taking, but all of the wines performed brilliantly, with my favourites being the rich, ripe, concentrated (and still only semi-mature) Pio Cesare 1978 and the beautifully rounded, soft, warming and slightly more modern Mascarello Monprivato 1985. In fact, all of the Barolos were pretty outstanding examples of their kind, and left the Barbaresco slightly trailing in their wake (though it would undoubtedly still shine amongst lesser company).
So where is the link between expensive Bordeaux and Barolo? Well, I would be willing to bet that none of the wines we enjoyed that evening cost more than £30-£40 (mostly from auction, I guess) and some may have been considerably less. But make no mistake, these were wines fit to grace any dinner table - and far more enjoyable than 95% of all the Bordeaux I have ever drunk (including a fair proportion of classed growths). In fact, the greatest expense involved in this particular dinner was surely Andy's trip to London last Friday - seemingly made with the sole intention of "scoring" that fabulous white truffle!

White truffle
So thanks to Andy and his lovely lady Jo, for a truly wonderful evening of (very) fine food, and some really outstanding wines - I really do feel blessed to have such generous and welcoming friends, whose company I value greatly. And I think they (and all the others present) will join me in saying you can keep your expensive Bore-deaux, whilst the rest of us enjoy wines with far more interest and character that don't cost the earth. ;-)
Posted by Leon Stolarski at 06:58

I'm at the barricades with you on Bordeaux, Leon. It's an irrelevance to me most of the time and, at the top end, an irrelevance to most wine lovers. The Chinese in particular are hoovering up first growths and then drinking them with about four years bottle age! My rapidly increasing irritation with the wine-pages forum is partly to do with getting rather bored at the small number of people who keep going on about, and having offlines around, wines that are way beyond my reach financially. Frankly, whether the 85 Lafite is showing better than the 89 is not exactly at the top of my agenda.

On the barolo front I haven't drunk many and am slightly ambivalent about the nebbiolo grape. I do love Barbera d'Asti and Barbera d'Alba, partly as I'm a sucker for wines with high acidity.

I mostly yake your side gentlemen but I must admit some of the very best wines I have ever drunk have been Bordeaux, especially left bank for me. I have a couple of cases of 1990 d'Angludet and La Lagune which are stunning at present, joyful wines to drink. I must admit that I was lucky, they were my only tentative steps into en primeur for 10 years and I hit a good vintage.
However, these days most Bordeaux is out of my price range and I make do with the odd bottle from time to time. I am more a Burgundy fan but claret still has so much to offer.
On the other hand, I agree with you Leon I'd rather buy a case of good Burgundy or Languedoc or German Rieslings than a bottle of 2nd, 3rd or 4th class Bordeaux.
Barolo is expensive though, I'm surprised if those wines you were very fortunate to drink weighed in at those sort of prices. I do like nebbiolo but Barolo is not something I have drunk that often. That menu looks great for a veggie like me and goes to show how such a powerful wine does not need meat.
You're a lucky man Mr. Stolarski!

I do agree about the posturing though, unfortunately I find myself less and less tempted by the forum. There's a lot of one upmanship which leaves me cold too.

Thanks for the notes & the pics - really glad you enjoyed it.

Damn - I clean forgot all about the Montequiou Grappe d'Or 2004! Lovely wine, I agree.

Andy - would you care to elaborate on what you paid for those Barolos, for the two Alans' benefit - and mine?(!)

Well, the two you liked best were the 1978 Pio Cesare, which was £20 and the 1985 Monprivato which was £50, both at auction. The rest were inbetween except the Brovia which was a little more, from a dealer.

OK, so a couple were a little more expensive than I thought, but overall, not too far away from my guess. Great wines, though - and if push came to shove, my outright winner would have been the Pio Cesare 1978. ;-)

Those are good prices for mature Barolo. I am surprised, perhaps I should look more closely at auctions.