Although the weather over the past few days has been wonderfully bright and sunny, there is no doubting the onset of Autumn. An early morning nip in the air and an abundance of dew is testament to that. And so, it is time for us to start opening a few more red wines (having consumed more whites in our house this year than ever before). And here are just 3 of the best we have tasted in the last week or so..........

Terre des Chardons Bien Luné 2012 Costieres de Nimes
Not *strictly* Provence, although Costieres de Nimes is as close as it gets without being so, wedged as it is between the southern Rhone, Languedoc and Provence. A 50/50 blend of Syrah and Grenache. When we last tasted this in June, the Syrah was very much the dominant variety, almost to the exclusion of the Grenache - so much so, that it would be hard not to imagine it was a rather good Crozes-Hermitage or even a lesser Cote-Rotie. It is still fragrant - actually, perfumed is a better word - with wonderfu plum, blackcurrant and floral aromas, but the Grenache now gets a look in. Spicy, earthy, raspberry and redcurrant notes abound, with hints of darker, crystallised fruits, black cherry and iodine. The palate is beautifully rounded, elegant and complex, with a softly tannic backbone, around which is wrapped the most voluptuouscloak of ripe red fruits, soft spice, minerality and subtle garrigue herbs. And all shot through with the freshest, most piquant sour cherry and soft citrus acidity. It really is a delightfully elegant and uplifting wine, the result of the finest grapes (biodynamic), a mix of traditional and whole-bunch fermentation, the complete absence of oak and brilliant winemaking. One of the best bargains I have ever found in 10 years of importing from Languedoc. £11.99. 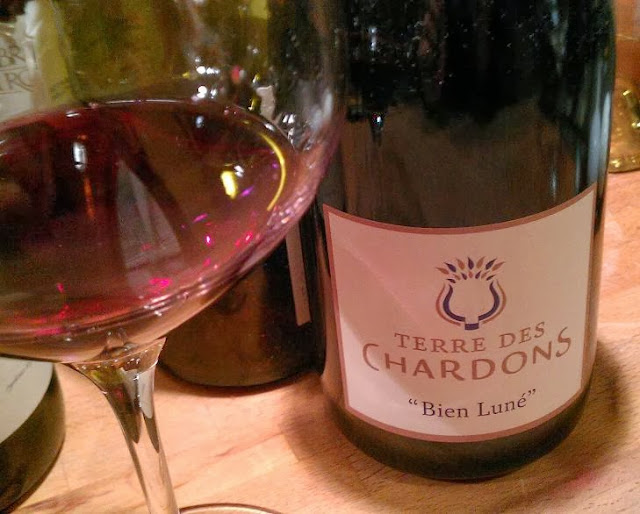 The next 2 wines speak very much of Provence. Grenache, Syrah and Mourvedre are the 3 varieties that make up the blend in the main Chateau d'Estoublon red wine. Winemaker and owner Remy Reboul told me at Vinisud last year that people had suggested, after tasting barrel samples, that he should bottle some varietal wines, such was the quality of each of them. He was, to be honest, rather scathing about the idea, since he believes that the true expression of his terroir is in the final blend, rather than in the individual components. Which is fair enough, but these wines are so good that they do - in my opinion - stand on their own as brilliant examples of what is possible on the southern slopes of the Alpilles.

Estoublon Mono-Cépage Grenache 2009 Vin de Table
The colour is a reassuringly pale/medium raspberry, with a slight tawny hue, whilst the nose is delightfully elegant, with aromas of redcurrant, raspberry and old leather fairly leaping from the glass, and subtle hints of sous-bois, graphite, truffle and soft citrus peeping through. There's also a gentle waft of very fine eau de vie, although despite the 15.25% (yes fifteen) abv, there is little suggestion of heat, either on the nose or the palate. Indeed, it is really rather fresh and elegant, with a veritable bucket-load of fresh and crystallised red fruit and soft citrus flavours, barely perceptible tannins and plenty of mouth-watering acidity. In the space of around a year since I last tasted it, this really has blossomed into something really quite lovely and more-ish - in short, a wonderfully balanced wine, which is a real delight to drink. Burgundy snobs might well throw their arms up in horror at my suggestion that a wine like this can be so fresh and elegant, but I would venture to say that it is almost "Burgundian" in structure. On the other hand, lovers of nearby Chateauneuf du Pape might be surprised that a 100% Grenache from outside of "their" region could be so utterly compelling. None of your 101 point Parkerised soup here, I'm afraid. Actually, I've heard more than one vigneron call Grenache the "Pinot Noir of the south" - and on this evidence, they are not far wrong. Wonderful wine. £19.99 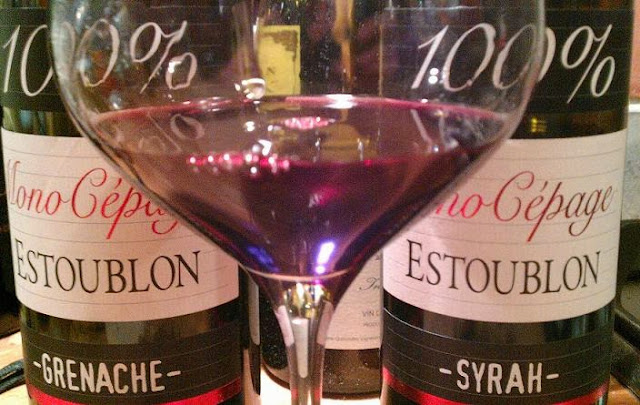 Estoublon Mono-Cépage Syrah 2009 Vin de Table
Deep, translucent blood red. Identifiably Syrah - bramble, blackcurrant, violets and herbs, again steeped in the finest eau de vie, with enticing hints of tobacco and damp earth. As with the Grenache, the alcohol (15.5% in this case) neither burns nor overpowers the fruit. Yes, it is rich and spicy, but gloriously tangy and balanced, with cherry skin and citrus flavours, ripe tannins and ample acidity ,all of which combine seamlessly with the abundant red and black fruit flavours. In fact, this is anything but soupy - quite the opposite. And it certainly passes the "more than one glass" test with aplomb. Elegant? No. More-ish? Yes indeedy! £19.99

Oh, and by the way, 28 September 1985 was hot and sunny. How do I remember? Because that was the day I married the lovely Diane. How lucky am I?! And to celebrate, we have been enjoying a bottle of Francis Boulard Les Murgiers Extra Brut Champagne. No tasting note - but it is very yummy - just like my wife! As is this wonderful bottle of Paul Jaboulet Ainé Domaine de Thalabert 1988 Crozes-Hermitage. 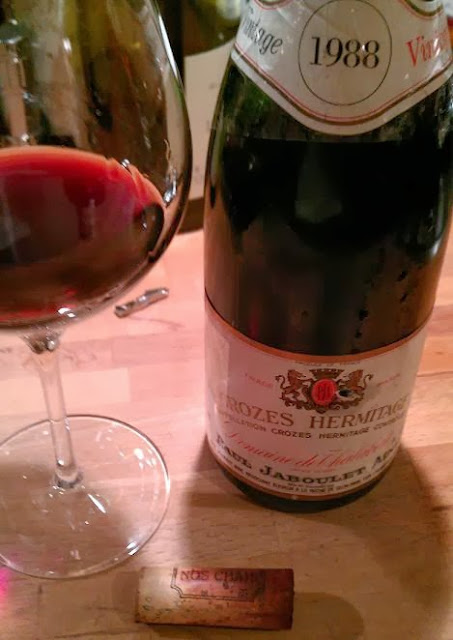 Posted by Leon Stolarski at 21:47 No comments:

The importance of family (plus wine and life in general)

I haven't posted on this blog anywhere near as much as I would like in recent times, which is down to a combination of circumstances - namely family, wine business and (frankly) sheer laziness. Anyway, by way of an update...........

July and August have come and gone in the blink of an eye, with no less than 5 pallets of new wines (from around a dozen different growers) and all that such activity entails. Not to mention a whole lot of other activity on the wine front - which, thankfully, entailed a decent amount of selling of the stuff(!) And of course we have enjoyed the best summer we've had in many a year, which meant plenty of lazy evenings spent barbecuing on the patio, eating lots of great food and enjoying plenty of good wine. No excuses at all - when it comes down to a choice between blogging and lazing about on a balmy evening, there is only going to be one winner. Food, wine and the company of family wins every time.

I have also to a certain extent been preoccupied with my Mum. Regular readers may know that she's not been too healthy recently. Following a bout of pneumonia in December last year, plus another couple of stays in hospital in Spring, she has been battling ill-health for most of this year. With an ever-increasing cocktail of drugs (Warfarin, Digoxin and a veritable box-full of other stuff), weekly visits to the health centre for blood tests and a constantly uphill battle against the resulting heart failure symptoms, she's had a right old time of it. Although she is 84 and has been afflicted with COPD for a number of years, she has always been extremely active and enjoyed an excellent social life. But this year has been different and - despite the wonderful summer - her illness has certainly taken its toll. Indeed, last week, I was beginning to wonder whether she would see the month out, never mind the year. It was all very depressing - not least for her, but also for me and the rest of the family. But over the past few days, lo and behold, she seems like a different woman. Something is working, and she seems much more chipper than she has in quite a while. Of course, it is still one day at a time, but every sign of improvement is a blessing.

Add to that the fact that my youngest son Daniel has had a promotion at work, oldest son Alex has found a new job, and they are both therefore happier (and better off financially) and it all adds up - for now at least - to all being well with the world. Of course, it cannot last (does it ever?) but whilst it does, I'm going to enjoy it. These are the days.


When I first started writing this entry a couple of days ago (see what I mean about being distracted?!) I was about to cook a wonderful chicken stir fry, prepared whilst enjoying a wine picked up at a bargain price from a local bin-end supplier, namely, the Blason de Bourgogne 2008 Beaune you see in the picture. Made by a mere "negociant" - or at least a large producer that buys-in most of its grapes, in the form of a co-operative - it is a decent, fruity, uncomplicated wine with plenty of Pinot/Burgundy character. It isn't complicated or even particularly concentrated - in fact, it is almost alarmingly light in colour, and would certainly not go down too well with those looking for bags of fruit or body. But it does what it says on the tin,  with sour cherry, cedar and damp earth aromas and flavours and cracking acidity. And at around the same price as your average supermarket BOGOF, it provided brilliant value for money. Oh, and it went beautifully with the stir fry!

Anyway, now I have eased myself very gently back into the blog, I intend to publish my notes on a rather good tasting of Californian red wines, last week at Nottingham Wine Circle. That will be within the next day or two........ Meanwhile, I am off for this week's edition - a Chardonnay and Pinot Noir special!
Posted by Leon Stolarski at 18:23 1 comment: