What follows was meant to form the basis of a newsletter to my customers, but I thought better of boring them with my thoughts (and occasional ranting), so it now manifests itself as my first blog post since January. 10 months without hearing from me? How have you coped?!

Anyway, a lot has happened in 2016 – and to be honest, not a lot of it good. A succession of national (and international) treasures dropping like flies, suffering the shock of Brexit whilst on holiday in the south of France, the ensuing fallout as a nation became deeply divided over the whole shambles…. and now President Trump(!) This really must be the weirdest (and for me personally) the most frustrating year in my 55 years on this planet. The last newsletter I sent out to my customers was way back in June, shortly after yet another bombshell, as we were forced (through no fault of our own) to move all of our wine stocks out of the bonded warehouse to another storage facility. The 5-figure sum that we had to shell out to pay the excise duty was a big cash-flow hit for a small company like ours, and recouping it was a slower process than we had hoped. Hence the relative paucity of new wines added to the Leon Stolarski Fine Wines portfolio this year.

The imminent threat of Brexit (I underline it because I believe it is by no means a done deal) is of course a constant worry. Whatever the arguments for and against - and, as you may have gathered, I personally can see little in its favour - the potential impact on wine importers, especially small independents like us, would be at best difficult to overcome and at worst disastrous. The 15% fall in the value of Sterling against the Euro is one thing (although we have been there before), but the possibility of leaving the single market and customs union is potentially a much bigger threat. Personally, I believe that unless and until we actually jump off that cliff, nothing is certain, but I guess only time will tell. Meanwhile, we carry on and hope for a workable outcome....

To be honest, there have been times this year that I have seriously considered packing it all in and finding something (actually, lots of things) more useful to do with my life. None more so than a couple of weeks ago, when a customer emailed me to say he was unable to complete his order on the website. In the 12-plus years of its existence, I had never encountered such a problem. Following no less than 3 days (and nights) of frantic efforts to fix the problem, I finally got to the bottom of things and managed to carry out a complete refresh/update that got things working perfectly again. Thanks in no small part to a thread from 10 years ago on a software user forum – isn’t Google wonderful?!

However, having dodged a bullet with that one, I finally realised that it was time to put 2016 behind me and get on with something I have been threatening to do for a couple of years. And so, we have invested in the latest all-singing-all-dancing e-commerce software and I will be busy over the next couple of months preparing for a brand new site to go live, hopefully very early in 2017. Wish me luck! Furthermore, with 2016 almost out of the way, and with everything back on an even keel, we will be back on the buying trail very early in 2017. So rest assured that Leon Stolarski Fine Wines is still here – and here to stay.

As for blogging, clearly I need to rediscover my enthusiasm and motivation. I'm not the sort of writer that can bang out an article (or even tasting note or two) in double-quick time - it takes concentration, attention to detail and the desire to provide regular input. Something(s) that I tend to lack, these days. Then again, if I can write tasting notes and other wine-related material on Facebook/Twitter, it will do no harm to copy them across to this blog, for my wider readership (if it still exists) to see. It might also help if I can, as the Leavers say, "get over it" and stop Remoaning! Meanwhile, here's a tasting note I banged out recently. ☺ 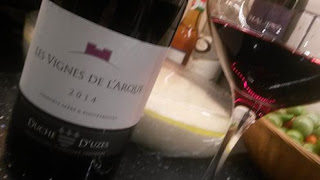 Almost a year on from my first taste of this wine, and it is really starting to sing. 50/50 Syrah and Grenache, it is full of bright, vibrant, chunky summer fruits, with a whiff of freshly-baked bread on the nose and just the right combination of ripe red/black fruit, rounded tannins and cherry kernel acidity on the palate, with a sprinkling of garrigue herbs and soft, peppery spice. Languedoc-does-Côtes-du-Rhône, to a very high standard indeed. A snip at £8.95 and the perfect pizza wine. 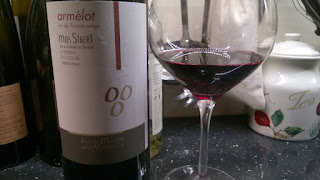 Sometimes, you open a bottle that just sings from the very first sniff and sip - and this is one of them. A quirky blend of 40% Merlot, 40% Syrah and 20% Petit Verdot, which is very definitely more than the sum of its parts. Winemaker Simon Bertschinger was very selective in opting for very particular clones of Merlot and Petit Verdot, choosing the ones that offer ample acidity. Ripeness is a given, of course, as the grapes are grown on gently undulating slopes around Pézenas, but it is a testimony to the skill of this young (Swiss) winemaker that he can achieve such wonderful balance and vivacity - not to mention a wonderful sense of place - in his wines. And this is simply overflowing with luscious, tangy, sweet-sour raspberry, blackcurrant and red cherry fruit, with hints of garrigue herbs, soft citrus and beautifully ripe tannins. And oh, that acidity. It just grabs you, in the most gloriously mouth-watering, tongue-tingling way! At just £11.50, it is an absolute bargain - a simply wonderful, life-affirming wine!