A new star in the Languedoc - Domaine Saint Sylvestre

I'm not quite sure how it was that I came to hear about Domaine Saint Sylvestre, although I have a feeling it may have been via their Facebook page. In any event, my interest was suitably piqued by the information I found and the images of their vineyards, scattered amongst the wild, oak-covered hills of the Terrasses du Larzac, near the village of Puéchabon, just a few kilometres north-east of Aniane - historically one of the real hotbeds of Languedoc fine winemaking, with such esteemed growers as Mas de Daumas Gassac, Domaine de La Grange des Pères and Domaine de Montcalmès all situated close by. 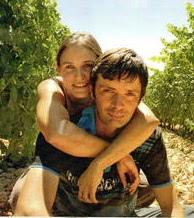 Vincent Guizard became involved in viticulture from an early age, working in the vines with his grandfather and, in the late 1990's, he worked with Olivier Jullien at Mas Jullien. From 2003 to 2010, he was part owner, in association with Frédéric Pourtalié, of Domaine de Montcalmès.

At the end of 2010, Vincent decided to break away from Montcalmès, taking his 7 hectares of vines and creating Domaine Saint Sylvestre, together with his wife Sophie, who also has several years' experience in winemaking, as well as having previously spent some time in London, working for a wine marketing company.

Having corresponded with Sophie via Facebook, she invited me to visit the estate whilst on holiday in the region last June. And so it was that we arrived in Puéchabon, for our 10 o'clock rendezvous with Sophie, on a somewhat atypical gloomy, overcast early summer morning. Before tasting the wines, Sophie drove us up into the hills, along a series of tracks almost as rugged as the landscape itself, for a tour of the vineyards. 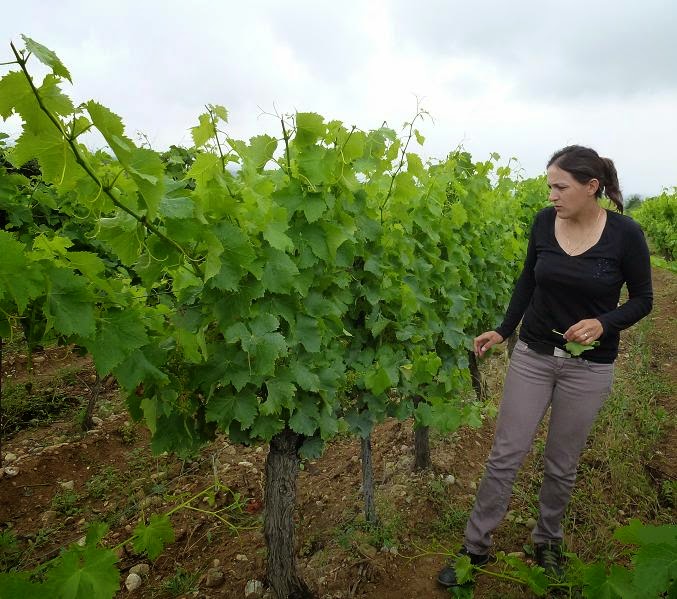 The estate currently comprises around 8 hectares, set in clearings among the holm oak forests above Puéchabon, and surrounding the isolated 12th century church of Saint Sylvestre des Brousses de Montcalmès. The vines are planted in four separate plots, all of which are between 300 and 350 metres above sea level; 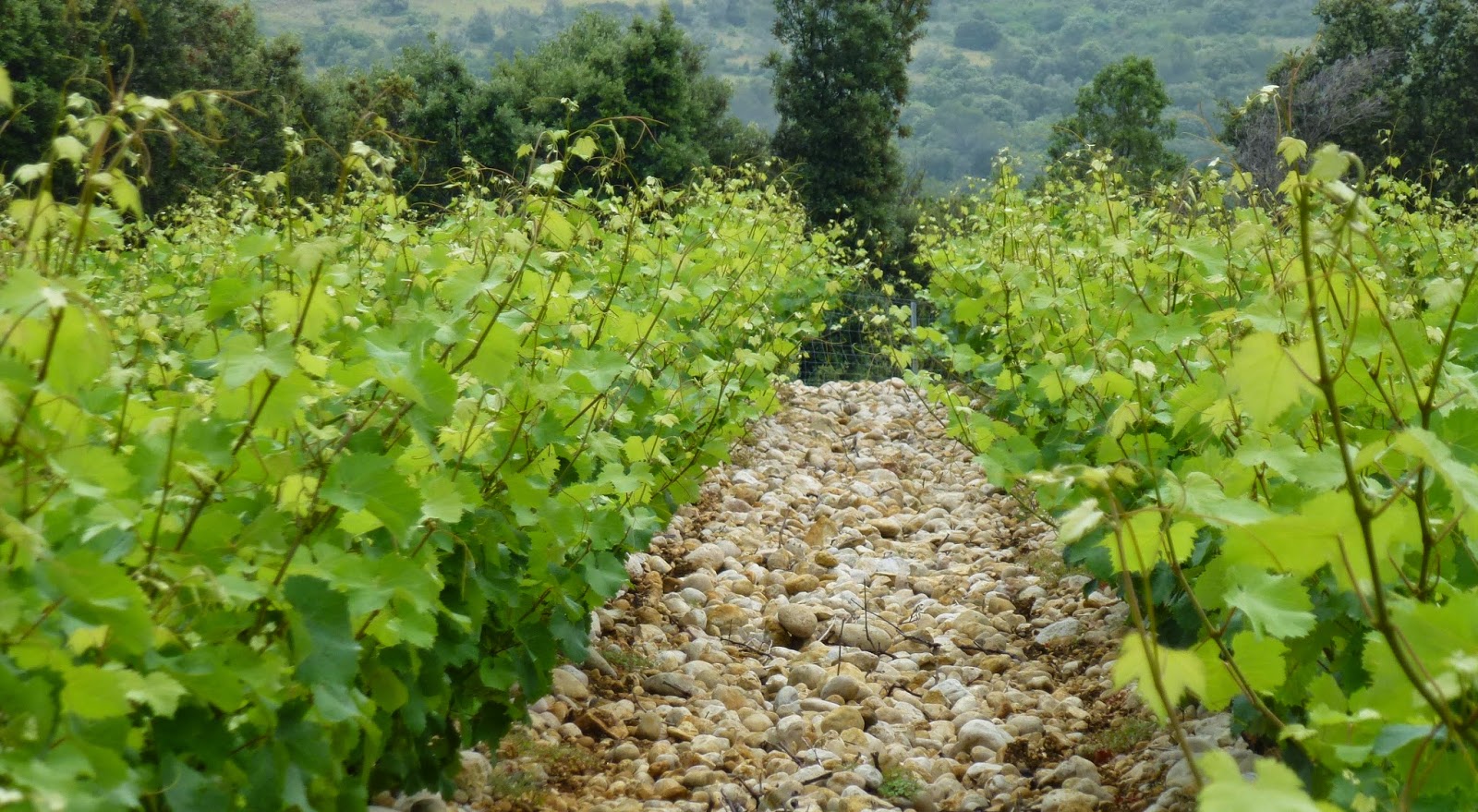 Even on such a gloomy day (weather-wise) the setting is beautiful and tranquil, leaving you with a feeling of being miles from anywhere - which is pretty much the case, actually (take a look at the satellite view on Google Maps and you will see what I mean). In many ways, it reminds me of Domaine de Trévallon - and not many vineyard sites can match such a landscape.

After our tour of the vines, we headed back to Puéchabon, where Vincent and Sophie have built a small but functional new winery, on the very edge of the village. Although not officially organic or biodynamic, Vincent and Sophie prefer a sympathetic approach to viticulture, along the lines of "Lutte Raisonnée" (the reasoned struggle) and no synthetic fertilisers or herbicides are used in the vineyards - apparently, the biggest danger to the vines are the voracious wild boar that roam the vineyards, feasting on the ripening grapes! All of the work in the vineyards is done by hand, and they keep the yields very low (around 20 hl/ha) by way of de-budding and green harvesting. Fermentation is completely reliant on naturally occurring wild yeasts. For the red wines, each grape variety, from each plot, is vinified separately, with long cuvaisons of between 30 and 40 days, then aged separately for 2 years in used barrels (i.e. which have seen one or more previous vintages) before being blended 3 months prior to bottling. For the whites, each grape variety is pressed separately, with the resulting juice being blended and then fermented and aged in used barrels for one year. Bottling is carried out according to the phases of the moon. 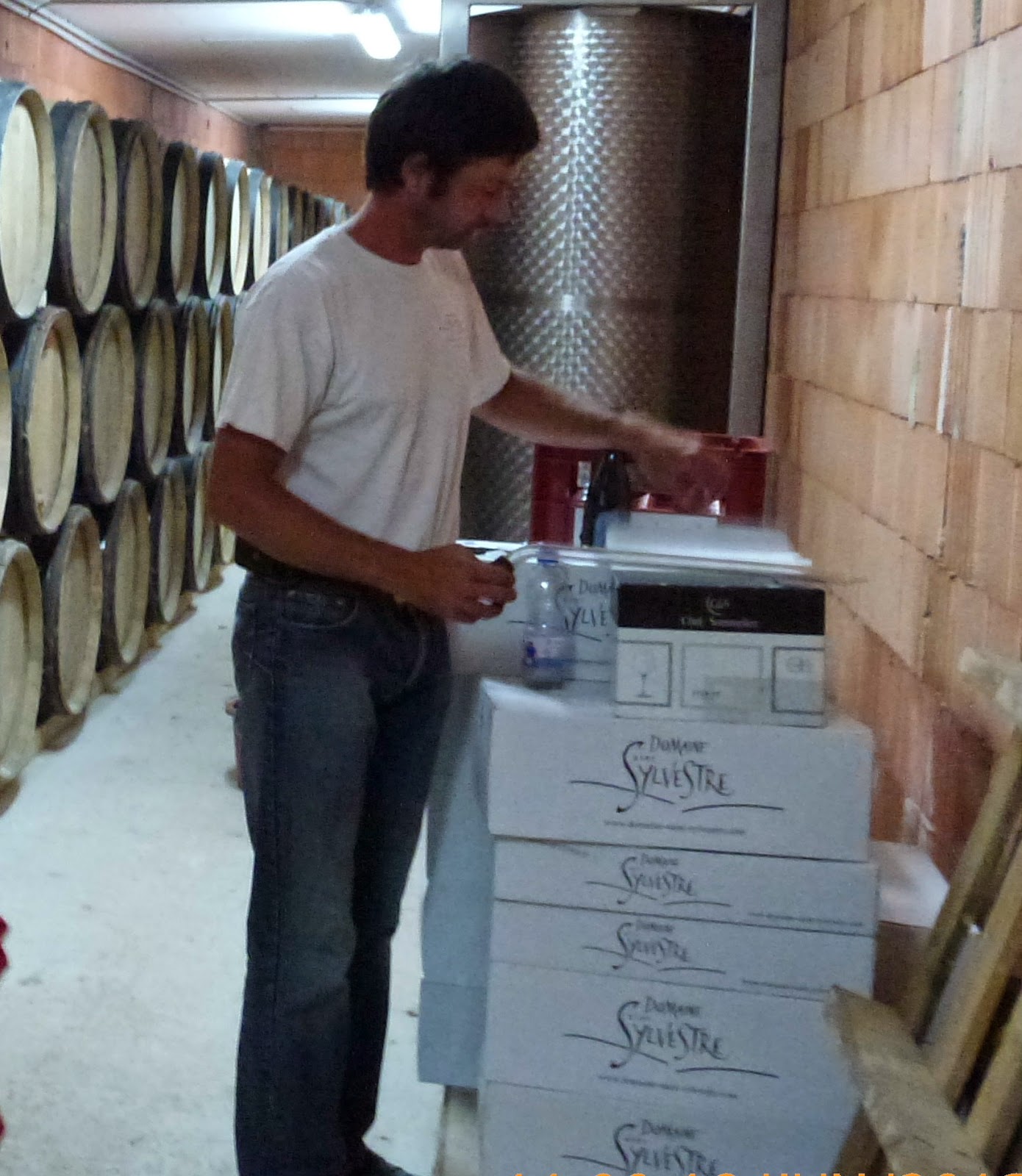 We were joined by Vincent for a tasting of 2011 wines in bottle, plus various components of the 2012's from barrel, beginning with the whites;

Le Coup de Calcaire 2012 (from barrel)
90% Chardonnay, 5% Roussanne, 5% Marsanne. Very cool-climate and Burgundian in style. Floral, full of fruit, yet delicate and minerally, with a fresh, almost prickly palate. A really fabulous expression of Chardonnay. If only I could get my hands on some!

Le Blanc 2012 (from barrel)
45% Roussanne, 45% Marsanne and 10% Viognier. A cool, minty, herbal nose, rich but not dense, lemon and orange. Not oaky. Gently prickly, without being zesty. Elegant.

Le Blanc 2011 (from bottle)
Same blend. The yield for this wine was a miniscule 13 hl/ha (18 hl/ha for the 2012 above). A little less expressive than the 2012, but still very complex, with hints of flowers and orange peel. Quite rich, unctuous and lovely, and I imagine quite age-worthy.

Then a series of 2012 reds from barrel, being the various constituents which would eventually go into Le Rouge 2012;

Grenache 2012 from the Saint Sylvestre plot - Gently woody and spicy, smooth and elegant, with red fruits, rather than black.

Syrah 2012 from Saint Sylvestre - Dark and dense, with an elegant nose of preserved red fruits and subtle hints of leather and meat. The palate is at the same time taut, yet elegant and lovely, with soft tannins, tangy acidity and gently spicy and herby.

Syrah 2012 from Défriche de Rouges - Robust and dense, with hints of curry spices, but with a delightful streak of freshness.

Mourvedre 2012 from Défriche de Rouges - This is so ripe! Brambles and prunes on the nose, with a hint of orange peel. The palate is contrary - fresh, almost zesty, with velvety tannins, spice and cracking acidity. Very long and lovely.

Les Vignes de La Garrigue 2012 (100% Carignan) (from barrel)
I must admit that I failed to enquire about the origins of this wine, but seeing as Carignan is not listed as being in any of the other four plots, it must be from an entirely separate plot. I have no idea of the age of the vines, though I suspect that they may be old and very low-yielding, for I believe only 300 bottles are produced annually. The colour is dense and, whilst the nose is a touch muted, the palate is gloriously expressive and elegant, with ripe red and black fruits, a hint of citrus and fantastic acidity. I love it!

Le Rouge 2011 (from bottle)
70% Syrah, 20% Grenache, 10% Mourvedre. A complex nose of ripe red/black fruits, leather and soft curry spices, with distinct notes of flowers and violets. Rich and expansive, with spicy undertones and herbs of the garrigue. A wine of real structure - lovely already, but with great potential for the future.

Les Vignes de La Garrigue 2011 (from bottle)
100% Carignan, neither fined nor filtered. Lots of leather, mixed fruit and citrus aromas and flavours, with a typical rasp of  Carignan rusticity - which is just how I like it(!)

And that was it - a fabulous and very enlightening tour and tasting, in the company of delightful people. The only disappointment (and a big one at that) was that Sophie and Vincent had not a single bottle of wine that they could sell me. With (by my calculation) only around 20,000 bottles produced each year, their wines are in such demand that they are available only on allocation, to their loyal band of customers and cavistes. Considering that the first vintage Vincent and Sophie made together was 2011, it is remarkable that they have gained such a cult following in such a short space of time. But, as the saying goes, good things come to those who wait - and we eventually managed to secure a small (very small) allocation of the 2012 red, and an even smaller allocation of the white. Unfortunately, we still can't get our hands on Les Coups de Calcaire or Les Vignes de La Garrigue. But now that we finally have our proverbial foot in the door, hopefully we can manage to secure more wines (perhaps even the whole range) in the forthcoming years. Meanwhile, these two beauties will have to do....... 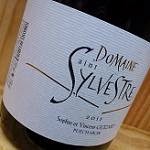 70% Syrah, 20% Grenache, 10% Mourvedre, aged 2 years in barrel. A deep, semi-opaque colour, with a powerful nose - a complex and heady array of black fruits, fresh bread and exotic spice aromas, with notes of leather and woodsmoke lurking in the background. Even after a full 2 years in barrel, there is just the merest hint of (older) oak, which only serves to heighten the fruit aromas, whilst further nuances of preserved fruits and fine eau de vie emerging with air. The palate is deeply concentrated and crammed full of flavour, in a spiced, baked fruit kind of way - rich, warming and almost a meal in itself. It is certainly good now, but is really only just starting out on a long journey of evolution - I'd say 10-plus years to maturity - with just the right levels of juicy acidity and rich tannins. Young, but with a great future ahead of it. (£18.50) 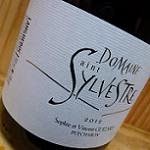 45% Marsanne, 45% Roussanne, 10% Viognier, fermented and aged in barrel for 1 year. A gorgeous, limpid, translucent pale gold colour. The nose is wonderfully complex, heavy with the scents of herbs, spices and stony minerality, at the same time exhibiting myriad aromas of apple and peach, mint, honeysuckle and fennel, with subtle notes of spring blossom and lime oil peeping through. The palate has a rich, creamy, almost oily texture, which is perfectly offset by juicy peach and apple flavours, a rasp of cut lime, garrigue herb and spice, whilst the heightened, limey acidity and intense core of minerality makes for an explosively refreshing, yet considerably complex wine. The flavours last an age on the finish, revealing extra layers of complexity and sensation as they do so. It is a shame we could only secure a handful of cases - and even then, we had to beg and plead - for this is without doubt one of the finest Languedoc whites we have ever tasted. A quite faultless and very special wine. Rated 18/20 in Le Guide Bettane et Desseauve des Vins de France. (£18.50)
Posted by Leon Stolarski at 04:12 3 comments: