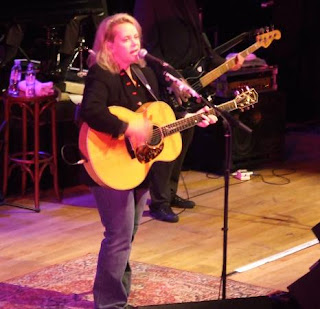 For one reason or another, I don't get to anywhere near as many live gigs as I would like to, these days. But in the last few weeks, I have been lucky enough to see no less than 3 of my favourite artists play live. In September, it was Wilco, in my opinion the best rock and roll band in the world. In October, it was Beth Nielsen Chapman, one of the great singer-songwriters of her generation. And last night, it was Mary Chapin Carpenter - in every respect, the equal of Beth, and an artist whose albums I have been buying for almost 20 years. No less than 5 Grammy Awards (from a total of 15 nominations) is testament to just what a great artist Mary Chapin Carpenter is, and a string of wonderful albums form an important - and oft played - part of my CD collection. Mary doesn't tour that often, and this was actually my first time seeing her perform live - but it was certainly worth the wait. She walked on and began the first song alone on her guitar, with each member of her band joining her, one-by-one, as the song built to a finish. And then we were treated to an hour and three quarters of pure joy, as she played a mix of songs from her latest album, The Age Of Miracles, and some of the gems from her back catalogue (I Feel Lucky, Shut Up And Kiss Me, He Thinks He'll Keep Her, Stones In The Road, Passionate Kisses, to name but a few). 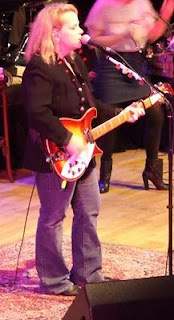 There are artists who play their music, but do little else to communicate with their audience (Bob Dylan springs to mind!). And then there are artists who play, but also talk to their audience, form a bond with them. Ones that spring immediately to mind are Bruce Springsteen and Nanci Griffith, whose performances are liberally sprinkled with anecdotes and stories behind the songs. But even they never connected with an audience in quite the same way that Mary Chapin Carpenter seemed to do last night. She spoke eloquently and elegantly, in a semi-hushed voice (no doubt hindered on this occasion by a cold) and held the audience in the palm of her hand - I really did feel she was speaking to me. She talked about her experiences of travelling around the UK - she swore she'd seen both Heathcliffe and Colonel Brandon up on the moors on her journey between Buxton and Derby(!) She talked about her home in the Blue Ridge Mountains, writing during the day and enjoying restful contemplation in the evenings, her 6 dogs and 4 cats and how she misses them when on tour, her worries about the current elections in the USA. Serotonin was mentioned (I don't recall why, but if you don't know what it is, look it up on Wikipedia) and Mary said the word always reminded her of Sarah Palin. Clearly, the very mention of that name does anything but give Mary a good feeling in her body - in fact, what she said cannot really be repeated here. But it was very funny!

One of the highlights of the show was a song called Mrs. Hemingway, which Mary explained was written about Ernest Hemingway's first wife, Hadley Richardson, and the happy times the couple spent in Paris, before he fell in love with her best friend. The version on the latest album is beautiful, but the story and the way she sang the song last night added new meaning - it was beautifully moving. If you want to hear the song, it is available to listen to on last.fm (or Spotify, if you have it). You can read more about the story behind the song (and The Age Of Miracles album) on the CMT website. You can also learn more from the Mary Chapin Carpenter website.

I should also mention her band, two of whom - guitarist John Jennings and piano/keyboard player Jon Carroll - have been with her for nigh-on 30 years. I have seen some great backing bands in my time (for example, the aforementioned Buce Springsteen's E-Street Band, or Brian Wilson's current band) but I've never seen a better, tighter or more self-assured one than this. It was musicianship of the very highest order, with fantastic arrangements and not a bum note in sight. 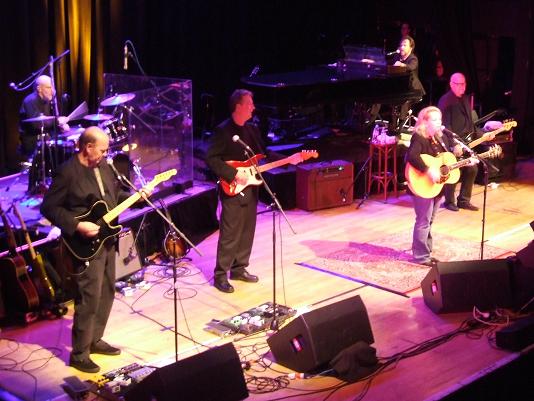 What a band! Vinnie Santoro on drums, John Jennings and  Jim Henry on guitars,
Mary Chapin Carpenter, Don Dixon on bass and Jon Carroll on piano and keyboards

The opening act is also certainly worthy of mention - Tift Merritt is a talented singer, songwriter, guitarist and piano player in her own right. In fact, she has already had a good deal of success, with several albums and even a hit record or two. 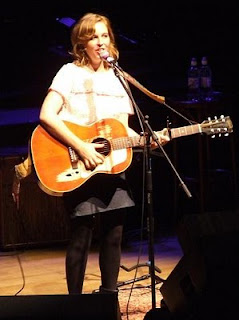 
All-in-all, this was a wonderful night and one I will remember for a very long time. I hope Mary Chapin Carpenter doesn't leave it too long before returning to these shores to tour again. If you don't know Mary's music, then I urge you to check it out. Meanwhile, here's a taster from YouTube, with Mary performing one her of best-known songs (although this one was written by another great American singer-songwriter, Lucinda Williams);

Great review. Stumbled across it while googling MCC. Mary Chapin Carpenter is possibly one of the most underrated singer-songwriters around.

Thanks for dropping by, Anon. And thanks for the compliment - nice to see that my occasional musings on things other than wine are appreciated by a wider audience. Isn't Google wonderful?!

No problem. I enjoyed reading your thoughts on MCC. I have all her albums but for me you can't beat the first four or five. However I do like "Between Here and Gone". The two most recent are ok but the songs haven't stuck in my head like the early ones. Favourite songs are "Family Hands"; "Middle Ground"; "He Thinks He'll Keep Her"; "Come On Come On"; "The Moon and St Christopher"; "Hometown Girl"; "John Doe number 24"; "Grand Central Station".

Saw her live once back in 1993 at Hammersmith Odeon.

Yes, her band are pretty tight but I don't think they match the E St Band at their best!

Paul - Stones In The Road and Time, Sex, Love are probably my favourites, but I like The Age Of Miracles for its laid-back feel. Looking forward to the new album and hopefully another UK tour........

As for Springsteen, I have seen him 5 times (twice in 1981, twice in 1985 and once in 1989). I was hoping to get to see him in Montpellier next month, but that may not now be possible, which is a shame, because I think that he is back on form, having produced his best album in nearly 30 years.

Now, I've never got into "Time, Sex Love". Although I like "The Long Way Home" a lot. Guess I must play it again.

Just listened to "The Calling" and "Age Of Miracles" again and getting into them a lot.

Springsteen - 16 times for me, dating back from 1981 in places as diverse as Paris, Detroit and Rotterdam. Going to Hyde Park in July. Now, I can't get into "Wrecking Ball" much at all. Like "Jack Of All Trades" and "Rocky Ground". Same for "Working On A Dream". A lot of the problem is the contemporary production which compresses the life out of the E St Band. "Darkness" is my all time favourite, followed by "The Wild, The Innocent.." and of course "Born To Run". Also, there's some great stuff on the "Tracks" box set that he inexplicably never released.

You are the first Mary Chapin fan I've ever come across! Her songs have been part of my wife and I's life for 20 years. Unfortunately, she doesn't seem to tour much abroad apart from the occasional trip to Italy or France which I am sure she loves as a Europhile. I missed the tour that you reviewed. Found out about it after it was over.

Just in case you read this, I sent you a couple of emails in reply to your email, but don't know if you have received them. If not, send me another email with your telephone number and I'll give you a call.

I didn't receive either of them, unfortunately. Have re-mailed you.

Something is wrong with one of our e mails somewhere along the line. Never mind. I've got hold of some wine now.

MCC at Derby Assembly rooms in October. Unfortunately just her and Shawn Colvin as a duo. No band.

Springsteen for me this Saturday in Hyde Park.