My Facebook friends (no doubt some of whom are also readers of this blog) will have seen a post from me a few weeks ago, extolling the virtues of a rather fabulous wine, which was a sample sent to me along with my previous pallet of wines from Domaine de Montesquiou. Problem was that it arrived in December 2014 - and I only actually discovered it a couple of months back! Furthermore, the label told practically nothing about what was in the bottle, and I was reluctant to open it until I knew a little more about it. A flurry of email correspondence with winemaker Fabrice Montesquiou eventually revealed that it was a (almost) dry white, essentially a Jurançon Sec, but with more residual sugar than allowed for it to qualify for that particular AOP. Hence, it is labelled as a "humble" Vin de France. Of course, as I have often opined, some of France's very best wines are - for a variety of reasons - labelled as such. And this was a very special wine indeed. And although that wine was from the 2013 vintage, I have managed to get my hands on some of the 2014, which is every bit as good! I'll explain in more detail a little later.

Meanwhile, here's a photo which illustrates what I have been occupying myself with, over the last few evenings................. 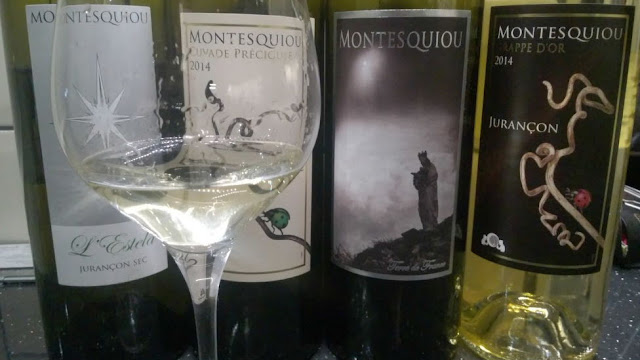 Yes, my latest pallet from Domaine de Montesquiou has arrived this week! All are from the 2014 vintage, and mostly bottled less than 2 months ago, so surely yet to really get into their stride. But boy are they good already! Here are my tasting notes............. 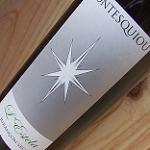 50% Gros Manseng, 10% Petit Manseng, 40% Courbu. Clear, pale, shiny silvery-gold colour. The nose offers a complex array of freshly-cut lime, orange peel and hay aromas, delightfully prickly and with an almost palpable minerally, smoky depth - a fabulous nose! Hints of peach/apricot add just a suggestion of richness, which manifests itself on the palate and offers a generosity that I haven't encountered in previous vintages of this cuvée. It really is delightfully concentrated and intense, yet wonderfully fresh and mouth-watering, in a zesty, appley, earthy, mineral sort of way. In fact, you would be hard pressed to find a wine of this sort of structure and class at twice the price. An absolute delight and by some distance the best vintage of this cuvée that I have tasted. 13.5% abv. £9.95. 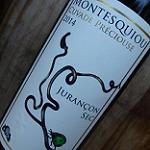 60% Gros Manseng, 30% Petit Manseng, 10% Camaralet. Bright, medium-pale, limpid gold colour. Intense! And very complex, too - aromas of lime oil and orange peel, with a generous portion of apple pie with raisins and hints of exotic fruits, not to mention a pot-pourri of herbs and spices. Having been bottled in September 2015, at the time of writing (November 2015) it takes a full day or more after opening to really open-up, but one's patience is richly rewarded. Although this wine spends 10 or so months in barrel, the oak influence is ever so subtle, allowing the fruit to shine through on the palate. It is concentrated but bone-dry (with just 2 g/l residual sugar), beautifully balanced, taut and structured, full of zesty lime/orange fruit, herb and spice and even a hint of grape tannin. As ever, though, the qualities that shine through more than anything are the intense, stony/steely minerality and tab-tingling acidity, which carry the fruit all the way through to a very long finish. Another truly life-affirming wine. 14.0% abv. £11.95.

To qualify for the Jurançon Sec appellation, the residual sugar in the finished wine must not exceed 4 grammes per litre. Depending on picking dates (the harvest is carried out in several tranches or "tries" - sometimes by necessity, as they have a limited number of vats) the potential alcohol levels in the grapes can be anywhere between 13% and 16.5%, especially for Petit Manseng. For the later-picked grapes, converting all of the sugars to alcohol can prove problematic, at least at the relatively low fermentation temperature Fabrice prefers. Because of this,  they occasionally experience a "stuck" alcoholic fermentation with at least one of the vats intended for Cuvade Préciouse. And whilst it is possible to kick-start the fermentation again (by increasing the temperature) Fabrice feels that this would not be true to the style of Jurançon Sec he is looking for. The upshot is that, with a little blending, as and when necessary prior to barrel ageing, he is able to make two distinct cuvées; Cuvade Préciouse, from (mostly) earlier-picked grapes, with 2 g/l of residual sugar and 14.0% abv, and Terre de France, from the later-picked grapes, with 10 g/l of residual sugar and 14.5% abv. Just a few barrels of the latter are made (no more than 4, so by my calculation, around 1200 bottles) and then only when the vintage conditions dictate. 2013 was the first vintage, and it was made again in 2014, but none was made in 2015 - so if you want some, don't wait too long!

This certainly isn't your typical "super cuvée" - it is a wine made largely by necessity, rather than design. And although the residual sugar means that it can only qualify as a "humble" Vin de France, it exhibits all of the qualities of Cuvade Préciouse - only with the volume turned up to 11(!) Yet despite its inherent richness and concentration, it possesses all of that wonderful acidity and minerality so typical of great Jurançon Sec, so it should (in my humble opinion) be treated as an essentially dry - albeit extremely versatile - table wine. Here's my tasting note................. 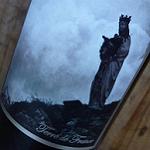 65% Gros Manseng, 30% Petit Manseng, 5% Camaralet. The nose offers masses of honeyed, sweet-smelling quince and apricot aromas, laced with aromatic herbs and spices, orange blossom, honeysuckle and a judicious lick of oak. And yet it still has that lifted lime oil and mineral quality so typical of Jurançon Sec - you can literally smell the acidity and immense freshness, even before you take a sip. Indeed, for a wine with such immense concentration (and an abv of 14.5%) it really is quite staggeringly juicy and refreshing, with barely a hint of alcohol, and the most complex array of flavours you are ever likely to encounter in a young, dry white wine. It manages to combine the same zesty lime/orange fruit, herb and spice qualities as Cuvade Préciouse, not to mention similar levels of acidity and minerality, whilst achieving perhaps even more depth and elegance. I'm not sure if my enthusiasm for this wine is quite clear enough, but just in case it isn't, I can tell you without a shadow of a doubt that it is the loveliest white wine to have passed my lips this year - indeed for many a year. If it were Burgundy (for there are indeed certain structural similarities) it would be a top 1er Cru at the very least. It really is utterly wonderful and more-ish. And at the price, a really quite remarkable bargain! 14.5% abv. £11.95. 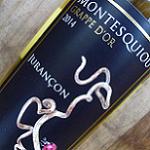 100% Petit Manseng. The grapes for this wine are harvested deep into November, by which time they have begun to dry on the vine, concentrating the flavours, whilst retaining all of the bracing acidity which is the hallmark of Petit Manseng. The colour is a very enticing shiny, rich yellow-gold. Goodness me, what a fabulous nose! The intensity pricks (or more appropriately caresses) the senses, offering a veritable orchard-ful of sweet apple, apricot, mango and passion fruit aromas, with further notes of dessicated orange peel, root ginger, cove and fig. Trust me, it's all in there! Take a sip and you are transported to vinous heaven. It is palpably sweet, luscious and full-bodied, whilst at the same time supremely balanced, courtesy of the most glorious, tangy, citrussy acidity and earthy minerality. You could *almost* imagine drinking this as a main course wine (think chicken, duck or sweet and sour pork), but the rich, sweet/tangy palate makes for a match made in heaven for starters such as patés, fois gras or smoked mackerel. Or of course it is equally suited to desserts (lemon or apple-based tarts and puddings) or soft cheeses. A stunning wine! 13.0% abv. £15.95.

Incidentally, during my recent flurry of correspondence with Fabrice, I asked him about Camaralet. This is a grape variety mentioned on most of the back labels of Domaine de Montesquiou's wines (except Terre de France, which doesn't mention any varieties), although I had never seen it listed in any of their "fiche techniques". Indigenous to south-west France, Camaralet is apparently very rare, these days, even in its home region, to the point where it has recently been on the verge of exctintion. Although known to have a fine aromatic and flavour profile, it has small berries in loose clusters and generally produces low yields, and is also susceptible to grey rot. But with the high trellising favoured by Domaine de Montesquiou (which allows the air to circulate freely around the vines) this is obviously less of a problem, although yields are unpredictable and vary from vintage to vintage. They planted more Camaralet vines in 2014, which should come into production in 2017 or 2018. It's great to see such passion for reviving these old, almost-forgotten grape varieties, from one of the finest growers it has ever been my privilege to be associated with.

All of the new wines from Domaine de Montesquiou are now available for you to buy (just click the links above the notes) - and bargains every one of them!
Posted by Leon Stolarski at 05:02

This producer sounds wonderful, Leon. We'll be in the Jurancon area for a week in early April, and I'm adding them to our list.