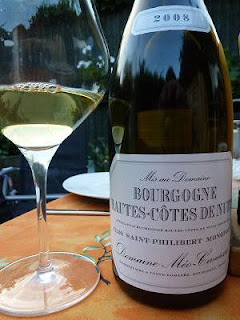 Domaine Méo-Camuzet Clos Saint-Philibert Monopole 2008 Bourgogne Hautes-Côtes de Nuits
Although I am a bit of a Burgundy ignoramous, I do know that this is (a) from a rather grand producer and (b) from a patch of land - albeit slightly higher and cooler - not too far removed from some rather grand (indeed Grand Cru) vineyards around Vosne-Romanée. In other words, it is - by repute, at least - top notch white Burgundy which is within the means of even relatively frugal wine buyers (like me). And by 'eck, is it good stuff! It probably lacks the sheer depth and breadth of it's more exalted brothers and sisters from the gentle, sun-kissed slopes lower down and nearer to the village, and perhaps even the expensive oak-ageing regime given to the finest cuvées, but it certainly doesn't lack in winemaking stakes - or for the qualities that elevate fine Burgundy above every single one of it's imitators around the world. Why? Because it possesses that wonderful streak of leanness and verve that sets it apart from the rest. I stress "leanness", rather than thinness, because it is otherwise possessed of all the flavour and grip you could ever ask for in a dry white wine. The last thing it needs is to be fat, for it would do nothing to enhance those wonderfully intense lemon/lime/apple and fragrant herb flavours, the sheer steely/stoney minerality and abundant (but beautifully ripe) acidity that makes you crave for food. It matters not what food, so long as it is savoury and filling. That is not to say this wine lacks richness - in this case, richness of flavour and lip-smaking more-ishness that renders the bottle two-thirds empty before the food even reaches the table! And the cost? A mere £16 (approximately) from the sale of some or other merchant whose name I can't remember (it was a shared purchase with some of my local wine geek friends). And at that price, it is a bargain. Delicious and life-affirming stuff!