A wonderful red wine to get me back into my stride

A few days after my last blog post, I went down with a kidney and bladder infection, which laid me low for a good few days, during which I felt quite possibly the most ill I have ever felt in my life. It was very similar to a bad case of the flu, with the added bonus of p*ssing razor blades (on one day, at least 30 times!). I spent pretty much all of the next few days and nights in bed, apart from my frequent "visits" and going to the kitchen to make cups of lemon tea (my comforting drink of choice, at times such as this). One of the most disconcerting things was the way I was constantly going from freezing cold shivers to waking up in pools of sweat and back again. Of course, when she was not at work, TLD was there to cater to my every whim, which really amounted to nothing more than the odd word of sympathy and a constant supply of hot drinks. I eventually went a full 5 days without eating and, despite the need to take on water as often as possible, I was pretty dehydrated. So much so that, even when I felt I was on the mend, I suffered constant headaches for several more days. I guess once the body has dehydrated so badly, it takes a few days to find its equilibrium. Having said that, I have yet to regain much of the half a stone I lost in the process, but I certainly wouldn't recommend it as a convenient weight loss regime!

Anyway, that is now thankfully all behind me and I am back to rude health - and even becoming vaguely interested in drinking wine again! So much so, that I opened a bottle of 2004 Chateau Musar, which happened to neatly bookend my illness, since the previous wine of any note that I drank was a bottle of 2001, which I referred to in my previous post. And where the 2001 didn't exactly have me purring with delight, the 2004 certainly did.......... 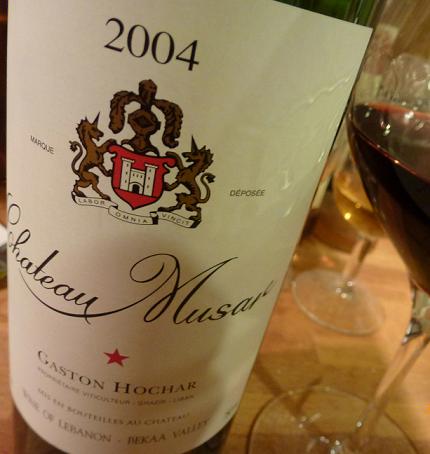 Chateau Musar 2004 Lebanon
This is the current release (though I have heard of a couple of sightings of the 2005) so definitely still youthful - at least in terms of Musar. The nose is classic (and this time I mean classic) Musar. A riot of complex red and black fruits, polished wood, toasty oak, beetroot, exotic herbs and spices and a level of volatile acidity I have rarely before encountered - even in Musar. And in all honesty, it merely serves to enhance what is already such a gorgeous wine. Even on the palate, the level of prickly, almost acetic acidity would have Bordeaux nuts and wine purists of all persuasions screwing their faces in horror. But the sheer concentration of sweet (really sweet) red and black fruit flavours is enough to convince me that we have a really wonderful wine here, with all of the components necessary for a classic "ageing" vintage, be that in 5, 10 or even 20 years' time. There's an almost lactic creaminess to the rich tannins, which again might put some people off, but to me just adds weight to what is already an impressively weighty wine. The depth of flavour really is remarkable. And of course there is that gloriously acetic acidity, which really does make the eyes narrow and the cheeks sing, and carries the fruit all the way to a long and deliciously sweet and sour finish. Going back to the nose after an hour or so in the decanter, some of the excess VA blows off to reveal black cherry, plum, bramble and blackcurrant, steeped in fine eau de vie. A delightful sous-bois quality and some savoury/meaty notes add yet more complexity. It really is a wonderful and gloriously quirky wine, made for contemplation, and which takes me back to some of the glorious vintages of the late 70's and early 80's and which got me hooked on wine (and Musar in particular) in the first place. If you don't have any, then I strongly suggest you go out and buy some before it runs out (it is widely available at under £20). And if you do have some, then I suggest you can take great pleasure in drinking it now, or let it age and evolve for another decade or more.

Incidentally, as part of my rehabilitation into the world of wine, I attended the "Outsiders" tasting in London yesterday, and will be reporting on some of the highlights in my next couple of posts.
Posted by Leon Stolarski at 16:27

Got an invite to the Outsiders but couldn't go, was it good Leon?
Glad you're back in rude health

An invite to the Outsiders, Alan?! Blimey, you'll soon be in the trade! ;-) Yes, it was a good day, and some lovely wines were on show. I made a few notes, so will hopefully publish those soon.