This is a wine I've been meaning to write about for a while. I opened my first bottle a couple of weeks ago and wrote the majority of the my tasting note at the time. Problem is, most of my notes are compiled with a good old-fashioned pen and notebook, so typing them out for online use is always a bit of a pain, especially when I leave it for too long. I like to think I write with a certain amount of feeling, but that feeling can somehow be lost if I don't get it to the keyboard fairly sharpish, no matter how memorable the wine. So what more excuse do I need for opening another bottle, in the early hours of a cold December morning, when I should be in bed (or at least making better use of my time by completing some urgent pre-Christmas updates to my website)? Don't get me wrong, my sustenance of choice at such a late (or should I say early) hour is usually either tea or coffee. But what the hell - it is December, so why not enjoy a little Christmas spirit................. 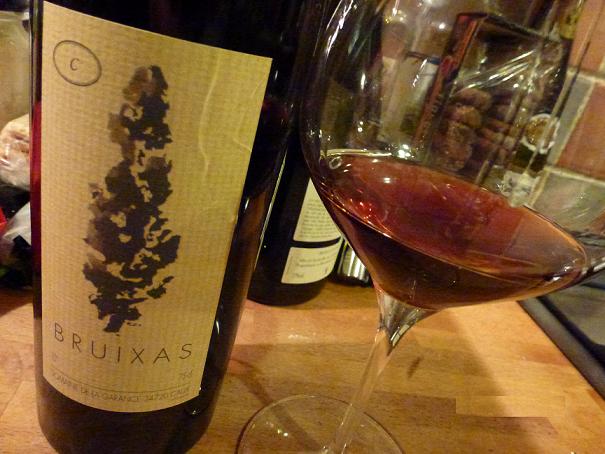 Domaine de La Garance Bruixas Vin de Liqueur Solera Hors d'Age
What to call this? Vin de Table? Vin de France? Or what? The label states the name, volume, abv, but nothing else. To be honest, it probably offends many a UK/EU labelling regulation, but I'm not too concerned, especially as I bought it from the grower's (ex) UK importer, rather than importing it myself. But what of the contents? Well, when I first tasted this wine at a dinner in the cellar of winemaker Pierre Quinonero in June 2012, I was completely blown away - and now I am blown away once more, for it is a real stunner.

100% old-vine Grenache, blended from the fruit of no less than 5 different vintages (from 2001 onwards) and lightly fortified. The label says 15% abv, but I'd say possibly 16-17. Like many of Pierre's wines, it can harly be termed "limpid", although to be fair the slight haze is more to do with a fine sediment, courtesy of having spent several years in barrel (or at least some of it) followed by a good couple of years in bottle, without fining or filtering. It is a lovely colour - sort of pale tawny/mahogany, fading gently to an even paler rim. The nose is quite beguiling - on opening, you get a lovely whiff of coffee grounds, chocolate and a touch of toasty oak. We also have molasses, fig, burnt orange, polished wood and a wonderfully evocative hint of autumn forest floor. Not to mention an array of fresh and preserved red fruit aromas, notably raspberry, redcurrant and wild strawberry. There's a hint of fine eau de vie, but this is such a gently and skilfully fortified wine that neither the nose nor the palate shows too much in the way of alcoholic heat. The palate is a glorious symphony of flavours, combining rich fruitcake, orange peel, fig, molasses, lapsang tea and mocha, with a long, tangy, earthy finish. Beautifully resolved tannins and a refreshing streak of tangy sour cherry acidity complete the package, in an utterly more-ish wine of great depth and complexity. Think of a mature Port (but with less alcohol) with a hint of fine old Banyuls and a touch of Madeira thrown in for good measure and you have some idea of the pleasure that this wine brings.

Simply wonderful stuff, which I have also discovered to be the perfect bedfellow for a thick slice of fruity stollen cake - and is thus a vital component of a healthy diet. After all, it is only 2 o'clock in the morning, and I have already had two of my "five a day"!

Oh, did I mention that you can buy this wine, via the Leon Stolarski Fine Wines website, at the perfectly reasonable price of £23.95? Be quick, though, as I don't have very much (and I may drink it all)!

Sounds like a fascinating wine. I won't even make an attempt to find it in the US. In fact, it seems almost impossible to find it anywhere; it's not even listed on the winery's web site. Quantities must be miniscule. I will keep my eyes out for it when we're in France next Spring, although we won't be in that area. Maybe I can find it in Lyon.

It is a rare wine, Bob, but take a look at wine-searcher. Here's a link for availability in France;

Thanks Leon. When I did a Wine Search search for the entire world, there were only 4 entries, 2 in France and 2 in the UK. And the first entry was .... Leon Stolarski Fine Wines!

Yes, you do occasionally come across the odd wacky fortified Grenache or similar in the Languedoc; they are indeed usually something to write home about, as the cliché goes. Sounds delicious Leon.

Thanks for dropping by, Richard. From your website (blog) I see that you haven't visited/tasted La Garance. Next time you are anywhere near Caux, you should pay them a visit. Pierre is a lovely chap and his wines (and winemaking philosophy) are quirky and thought-provoking!

Friends in our village had a bottle of this until recently when yours truly finished it off. I suspect they'd had it 10+ years but it was never touched, except by me at the end of a meal.
Curious as they have no wine knowledge whatsoever and normally drink BIBs or supermarket stuff.
Agree that Banyuls meets Tawny Port meet Madeira sums it up.

Graham - I assume the bottle had therefore been open for a good few years? If so, it just goes to show how indestructable these sort of wines are! I must have another glass this evening. ;-)

Indeed. Recall the bottle was about two thirds full before I got started.

Sounds like a nice tipple...and don't grapes count as one of your 5 a day?